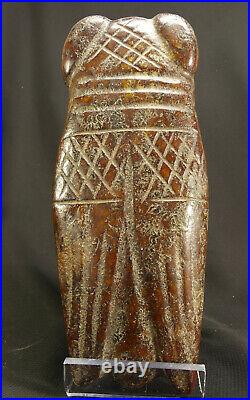 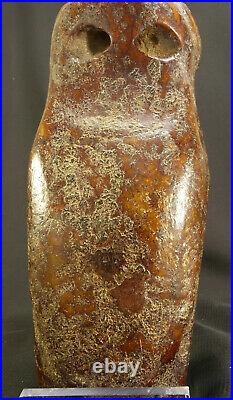 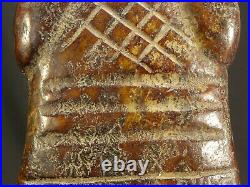 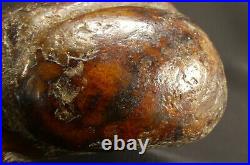 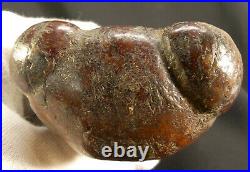 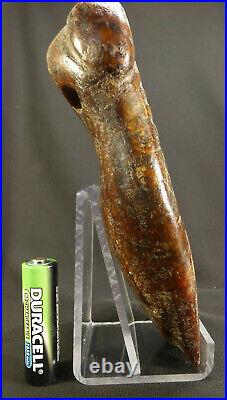 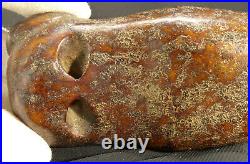 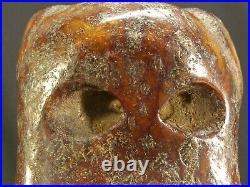 A Dragon can be unseen or visible, minute or huge. However, always it is great. Houghton, the President of ANCIENT CIVILIZATIONS. A State of Washington Licensed Business, assumes all responsibility for the information contained in this description and for the English translation and transcription of the ancient Chinese graphic characters.

Furthermore, I prohibit the further dissemination of this information in any written, video, or electronic format without my expressed, written approval. This exceptionally large cicada amulet is an ancient, ritual offering by the Sons to honor their departed Father to the Ancestors.

It is made of prized Nephrite Jade that after 5,000 years has turned a beautiful shade of dark, saddle brown that is almost red from the iron and other elements in the soil. 1.19 (30 mm) thick. This amulet is in exceptionally good, museum quality condition, with no repairs or restorations. It has been professionally cleaned by the previous owners that allows us to better see the character inscription/dedication. But it still retains its lovely, original patina of iron red mineral deposits that have turned the once green nephrite jade a deep saddle-brown color with orange highlights.

This cicada, a Chinese symbol of immortality, has an estimated 50+ symbols/characters incised, pecked, and painted onto all sides of the cicadaeven on the surface of its eyes. These characters describe the offering of this jade amulet, wine, and meat to the ancestors in order to ensure safe passage of the soul of the departed to immortality in Heaven. This number of characters is large for this Neolithic time period in China, as smaller jade cicada amulets have no characters or only have less than five characters on them. On the obverse (front or in this case top side) of the cicada are a repeating series of hashtag #### cuts into the jade on the top of head and wings. Under magnification, one can see that these cut lines were made with a rotating, abrasive disk that was powered by a foot peddle.

These lines were not just made to accurately represent a winged cicada, but also were a pictographic symbol to document the presence of their Ancestors. In ancient Hongshan Culture, these pictographic hashtags represent the offering that is presented to the footprints of the Ancestors for their approval. The Hongshan tried to discern the presence of their ancestors by putting sand or ashes on a crisscrossed bed of planks #### in order to hope to see the footprints of their ancestors in the ashes. One can even see pictographic images of the Ancestors as they were painted in thick, black paint, which was made of a mixture of iron, manganese, and animal fat.

Because the paint was made from mineral elements, the images are still visible on the jade cicada after 5,000 years. It is known that the Hongshan decorated their pottery with these black, pictographic characters, but documenting that this same paint was used to paint graphics on this jade cicada offering to the Ancestors is exceedingly rare.

Normally, the Hongshan used incised or percussive pecked graphics to document their offerings to their Ancestors. The reverse (back) side of the cicada has at least two Fire-Breathing Dragons that have been pecked and also painted in black onto the surface. The Emperor/Warlord was considered the son of the Dragon God of Heaven (Tien in Chinese) and only he could be portrayed as a Dragon under penalty of death. If you look carefully at the macro photos you can see the images of the two dragons (both facing left in these photos) with their jaws wide open and breathing a ball of fire!

{See photos # 8 & 9}. The multiple images of the omnipotent dragons suggests that the sons and perhaps even the grandsons of the Emperor/Warlord also wished to be considered as sons of the Dragon God of Heaven. There are several more pictographs on both sides of the cicada that I have attempted to translate in the section below. This jade offering appears to be from the son and grandsons of the deceased and was certainly part a ritual offering to the Ancestors in Heaven to grant the soul of the deceased a safe journey to Tien and immortality.

This amulet offering had to be crafted and engraved for a wealthy member of a warlord or royal family, as only those individuals would have permission to use the Dragon pictographs and the means to afford such an expensive and elaborate offering. This jade amulet has two, curved holes on the reverse side of the cicada that would have been used for suspension around the neck--see macro photo # 10. Archaeologists classify these curved holes Ox-Nose Holes and they have been drilled by ancient hand tools at low RPM from both sides of the amulet are curved in the centersee macro photo.

These holes are period correct and have a wonderful layer of calcium and micro-crystalline jade inside the bore holesjust perfect. Jade was highly prized by these early civilizations in China, and it was thought to have positive energy to drive away evil spirits and bring good luck and fortune to all who wore a piece on their personin life and in death. Jade was also believed to be a portal or messenger that could carry prayers to Heaven and send messages to those on Earth from departed ancestors and Gods in Heaven. But they are also referred to as guo guo.

, which generally refers to a cricket. In ancient China, the cicada was a symbol of transformation and resurrection because of its life cycle. The first 13 to 17 years of its life are spent underground, after which, it emerges in its final nymph stage.

It then sheds its skin to reveal a mature form with wings, as this cicada is represented. Cicadas were a symbol of this resurrection and the hope for immortality of the soul as it departed for Heaven. English Translation of the Pictographs.

As noted above, this unique amulet contains an estimated 50+ ancient, Chinese pictographic characters that have been painted, incised, and pecked into the amulet. The symbolic characters were an inscription/dedication to offer sacrifice to the Ancestors and plead that they accept the soul of the departed into Heaven (Tien) for eternal life. We know that this amulet was made in the mid Hongshan Culture (4700 BC2250 BC) because of the use of a grinding wheel to make the hashtag cuts instead of a non-rotating abrasive tool and by the graphic characters on this amulet. This Neolithic culture used this type of tool and characters/images (also called graphics) from about 3,500 BC until about 3,000 BC. This style of pre-writing is often called graphic or pictographic as it uses images of physical items and not symbolic characters called Shuowen Jiezi , which was used before the next type of Chinese characters were used to form a written language that we now call Seal Script or Kuwen.

Ref: Chinese Characters , Wieger, S. Some of these amazing graphics can best be seen under 10x magnification, but even then I cannot see all of them clearly enough to decipher and translate them. Millennia of mineral deposits and natural weathering have made it difficult for me to clearly see the tiny figuressome only about 2mm tall. This artwork is truly spectacular and of museum quality. Here are just a few of the pictographic characters that are engraved in the ancient pictographic script over 5,000-years-ago. As noted above, on the obverse (front or in this case top side) of the cicada are a repeating series of hashtag #### cuts into the jade on the top of head and wings. {See macro photos # 1 & 3}. One of the largest characters is the one composed of the three, parallel lines that are on top of the neck of the cicada. That is the character San that means Heaven, Earth & Mankind. In ancient form, it can also represent the perfect, parallel lines formed by a square. {See macro photo # 3}. Just below the bottom line of the previous character San you can see the images of several figures that have been painted in black and that are under a. I believe these graphics represent the Ancestors who have come down from Heaven (in Chinese Tien) to Earth to receive the offerings that have been presented to them. Earth is represented by the lowest, horizontal line in the character San.

The first Dragon is about 1.5 (37mm) long and his head is placed between the two holesin Hongshan beliefs, holes represented Heaven. {See macro photo # 8}. The soul of the departed rides the above Fire-Breathing Dragon as it carries him safely to Heaven.

Below and to the left of the above Dragon is a second, longer Fire-Breathing Dragon that measures about 2.75 (70mm) and is painted in black and pecked into the jade cicada. Both Dragons were thought to scare away Evil Spirits and capable of carrying the soul of the departed safely to eternal life in Heaven. {See macro photos # 9}. Ancestors are depicted painted inside the eyes of the cicada.

The Son(s) has a flint knife in his hand. A Heaven Bird flying towards the Heavens and carrying the prayers of Earth to Heaven. Ritual wine that is poured onto a bed of grass and then burned. And over an estimated 40+ other graphics/characters that further describe the ritual dedication of the gifts to the Ancestors.

The Hongshan Culture The Hongshan were temple builders and city builders who created some of the earliest nephrite jade carvings. Their sophisticated Jade carving techniques employed technologies that exceeded simple explanations. It has recently been discovered that the Hongshan possessed the knowledge of metallurgy and employed the use of copper and iron from meteorites as tools to work their jade masterpieces. Many of the Hongshan Jade artifacts are well persevered because the Hongshan culture utilized slab burial tombs and because of the dry arid climate of Inner Mongolia.

As many of you know, Nephrite jade, also known as soft jade or ancient Jade in China, was used from Chinas early Neolithic cultures in 8,000 BC to 1800 AD for carving all types of ritual and utilitarian items. Nephrite, which is somewhat softer than the jadeite used by Neolithic Japanese and European cultures, was easier to cut, carve, polish, and drill than jadeite. So, the ancient Chinese found that Nephrite Jade could be worked by using quartz or garnet sand, polished with bamboo or jade dust, and even drilled with wood drills that used a slurry made of jade dust and water as the abrasive.

Based on artifact evidence and 30 years of study, it appears that the Hongshan employed advanced jade shaping and carving tools that may have been made from meteorite iron or even diamonds. One fascinating study is the evidence of high content iron found in black jades used for ritual objects by the early Hongshan. Many of these artifacts are often magnetic and express the possibility that the Hongshan were aware of magnetic earth forces.

During Chinas Neolithic Period, Hongshan Jade ritual and tomb objects were created for a period of more than 2,000 years. Hongshan jades have been discovered in large quantities with over 52 different types of Jade objects in various shapes and forms. The Great Bronze Age of China. An Exhibition from the Peoples Republic of China , edited by Wen Fong, Metropolitan Museum of Art, 1980.

Archaeological Institute of America, Feb/March 2015. Please examine the macro photos carefully as they are part of the description. The item "XLG Chinese Hongshan Jade Cicada with Imperial Warlord Dragons & Translation" is in sale since Monday, April 26, 2021. This item is in the category "Antiques\Asian Antiques\China\Figurines & Statues". The seller is "houghton-usa" and is located in Sequim, Washington.