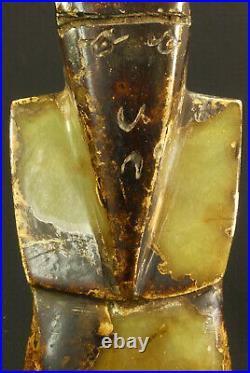 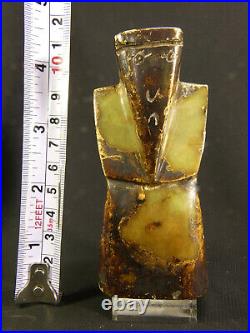 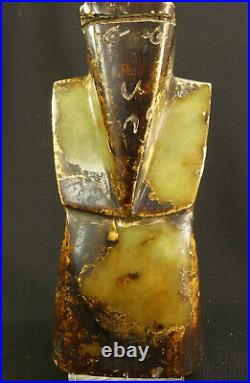 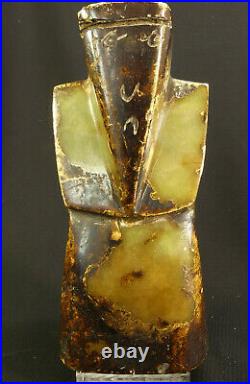 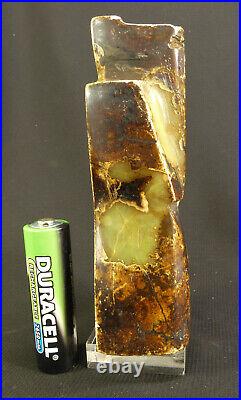 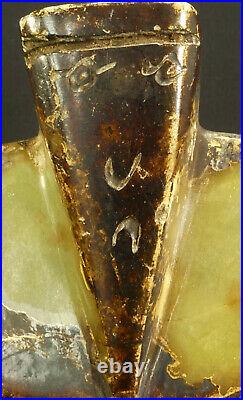 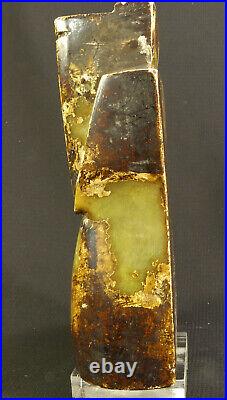 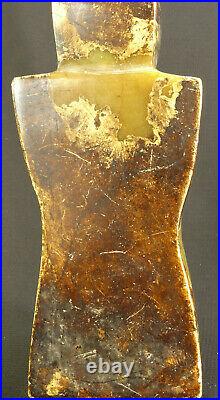 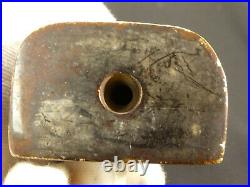 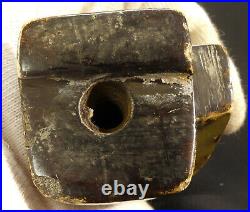 Artifacts, Antiques & Fine Collect i bles. Jade Pendant of a Chinese Imperial Counselor/Minister to the Emperor. Painted Pictograph of Son sacrificing Beast. Houghton, the President of ANCIENT CIVILIZATIONS. A State of Washington Licensed Business, assumes all responsibility for the information contained in this description and for the English translation and transcription of the ancient Chinese graphic characters. Furthermore, I prohibit the further dissemination of this information in any written, video, or electronic format without my expressed, written approval. Jade Pendant of a Chinese Junior Imperial Counselor/Sage to the Emperor. Highly polished nephrite jade, with pictograms painted black on all surfaces of the pendant. This nephrite jade, Liangzhu Culture pendant is in museum quality condition.

The celadon green jade has turned an amazing shade of orange/brown from the iron and other elements in the damp soil that have been absorbed into the jade after being buried for thousands of years. This patina should never be removed, because the natural patina is one way to identify an authentic Liangzhu jade. Small sections of the orange/brown patina has been removed by polishing on the left side of the man's head by the previous collector in China; this exposes the original color of the nephrite jade-a lovely light, celadon green.

Provenance: This amulet/pendant is one of several almost identical pendants that were obtained from a private collector in China. This example is slightly smaller than the others, and therefore compared to the other larger and heavier men, might have been a junior ambassador or sage. I believe these pendants would have been included in an Emperor's tomb to provide him wise consul and advice in his eternal afterlife in Heaven. These pendants have for many years been in this author's private collection in the State of Washington. This is the first time it has been offered for sale in the United States.

Painted on the back of the pendant, are pictographs of the Son holding a flint knife that he has used to sacrifice an animal. This one pictograph verifies that this man held a high-level position of sage/advisor/minister or ambassador in the Emperor's court, as no ordinary old man would have had a sacrifice documented on a piece of jade that would have been placed in the Emperor's tomb or in his temple. These items offered for sale by Ancient Civilizations are unconditionally guaranteed authentic.

They were legally imported to the United States years ago and are legal to sell and own under U. Statute Title 19, Chapter 14, Code 2611, Convention on Cultural Property.

This lovely jade pendant dates to the Neolithic Chinese people known as the Liangzhu Culture 3500 BC-2100 BC. The Liangzhu are believed to have been the first people in China to ever use jade as a marker of social status-and this jade pendant of an imperial, venerable. Sage, likely of ambassador or minister rank, is an awesome example.

This 4.36 (111 mm). Tall pendant is in the form a stylized older sage/ambassador, who has a long triangle-shaped beard and was likely a venerable sage/ambassador and member of the Emperor's Imperial Court. He wears a high-status, long-sleeved gown with square shoulders that is belted in the front and reaches to the floor. His tiny, almond shaped eyes and curved mouth with a smile have been incised into the hard jade with the finest of cut lines and are utterly amazing.

Some experts suggest that a diamond or iron meteorite awl was used by the Neolithic stone masons to make these ultra-thin cut lines, as Neolithic cultures did not have iron tools to incise the extremely hard jade. The pendant appears to have other pictograms that were painted in black, mineral pigment colors onto the highly-polished surface of the old sage when it was made and dedicated to him millennia ago.

But they are largely faded or blurred, and not clear enough for me to translate. The pendant has a drilled hole that passes from the top of the head to the flat base.

When trying to look through the hole, one will notice that it curves in the center where the two holes met after hours of painstaking drilling with primitive hand tools from both ends of the amulet. Archaeologists classify these holes that go form the top of the head to the base as "bi-conical bore holes, " which was the common type of hole made in the Liangzhu Culture. It was necessary to drill from both sides with a hollow, bamboo tube that would be dipped into abrasive and then rotated rapidly against the stone to affect a ring-form type of hole, leaving the solid core intact. Therefore, the meeting place of the two borings is not true to a single, straight channel and a curved remnant ridge that is not ground or polished-out remains at the common junction.

The center core was often snapped off by tapping or pushing the center core to one side and thus completing the long hole. Then entire pendant is defined by incision and plain modeling, with a flat back and notched top of the head. This same style is seen copied 2,000 years later during the Western Han Dynasty (202 BC-9 AD).

It is a powerful, abstract image and one meant only for the royal class. Please examine the macro photos carefully as they are part of the description. This item is in the category "Antiques\Asian Antiques\China\Figurines & Statues". The seller is "houghton-usa" and is located in this country: US. This item can be shipped to United States, all countries in Europe, all countries in continental Asia, Canada, Australia.