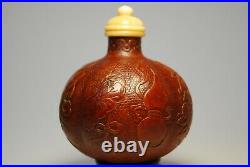 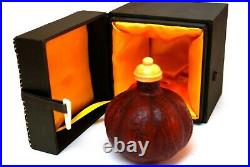 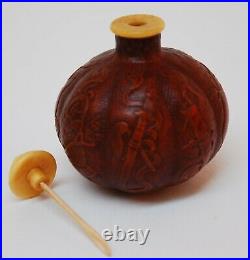 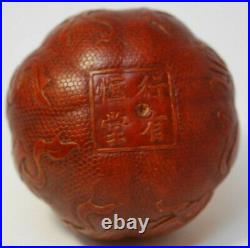 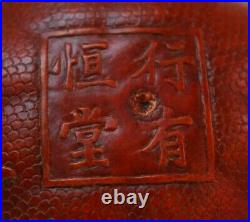 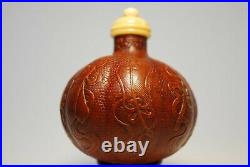 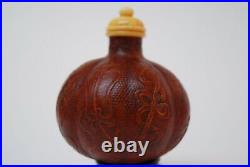 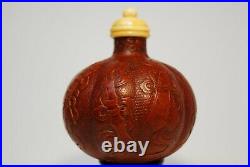 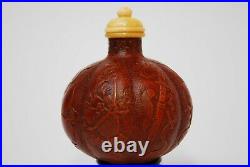 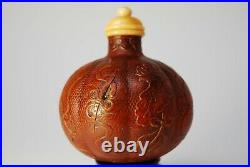 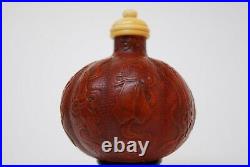 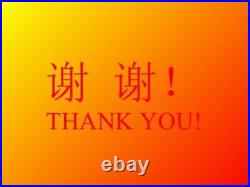 This gourd has retained the intricate and fabulous carvings of the mould that it was grown in. It is well-hollowed and surprisingly very light in weight. This is the real thing and it is not a resin copy. The original rim, topper and spoon are from natural sources.

The designs found on this gourd depict the eight Daoist emblems. It is authentic as well as extremely rare and valuable. There are few authentic Imperial treasures that are found outside of museums.

The maker's mark is the personal mark of this important prince who historically was a fervent supporter of the arts. This brilliant treasure was acquired by the former owner in the 1950's from a New York dealer who specialized in Chinese antiques. For a snuff bottle it is relatively large as it is about the same size as a baseball. It is 3 & 3/8" inches in height and approximately 2 &3/8" inches wide.

By comparison, a baseball is perfectly round with a diameter, or width of 2 & 7/8" to 3" inches. An excellent attribute to this piece is that the natural gourd vine hole in the middle of the mark does not interfere with the four characters as is not usually the case with these very rare gourd vessels. Meaning of the 4-Character Mark. Xingyouheng-tang is also known as the "Hall of Constancy" mark.

He was the Emperor Qianlong's great-great grandson. Originally, utensils with this mark had been customized by him.

The attributes of the eight Immortals symbolize Daoism, transmutation and happiness. Each of the symbols is the attribute of one of the Eight Immortals - legendary figures said to have obtained immortality through the elixir of life produced by alchemy or by eating magic fruits. Although some of the Eight Immortals form part of the Daoist's legend, it is unlikely that as a group they were honored any earlier than the Yuan Dynasty. Each represents a character or a condition and in turn an object symbolizes each Immortal.

Double-gourd, which contains all magical medicines, of Li Tieguai , dispenser of medicine. His emblems are an iron crutch and a gourd.

He sometimes stands on a crab or beside a deer. Peach and Fan - resurrects the dead, of Zhongli Quan represents the military man. Chief of the 8 Immortals. Has the Elixir of Life, the power of transmutation, symbol of longevity. Carries a peach and a fan to revive the souls of the dead, the Fan also being a symbol for delicacy of feeling.

Flower basket or sometimes a flute of Lan Caihe , the patron of florists and a symbol of delusive pleasure. The Flute is an emblem of harmony and also of the Patron Saint of Musicians. Bamboo drum and rods of Zhang Guo represents old age and in a symbol of longevity.

Lotus of He Ziangu , The Female Sage who gives assistance in house keeping. She is sometimes poised on a Lotus leaf, holding a fly whisk.

Sword, and sometime a fly whisk, of Lu Dongbin , the Patron Saint of scholars and barbers is worshipped by the sick. He slays dragons and rids the world of evils. A fly whisk is also a symbol for the Buddhist admonition "Do not Kill", for'magic' and'leadership'. Flute of Han Xiangxi , the Patron Saint of Musicians has the power to make flowers grow and blossom immediately. The Flute is an emblem of harmony and also of the Patron Saint of Florists.

Castanets of Cao Guojiu , the patron saint of theater actors. This snuff bottle is masterful and it is one of the best out there that is not already in museums or private collections.

We are motivated sellers from California, U. Hurry, this treasure will not last long before someone scoops it up.

There are 27 separate snuff bottles, some signed. Feel free to see these treasures in our other auctions currently going on. The item "RAREST OF THE RARE IMPERIAL MARK MOULDED GOURD CHINESE SNUFF BOTTLE PERFECT" is in sale since Sunday, January 3, 2021. This item is in the category "Antiques\Asian Antiques\China\Snuff Bottles". The seller is "catherines_house_of_treasures" and is located in El Cajon, California. This item can be shipped worldwide.