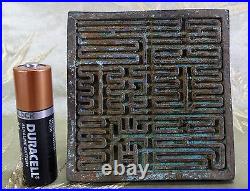 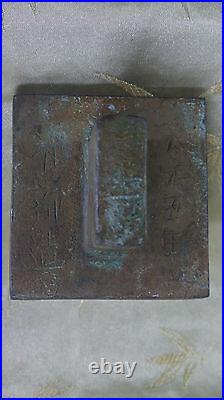 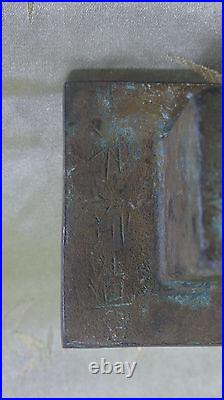 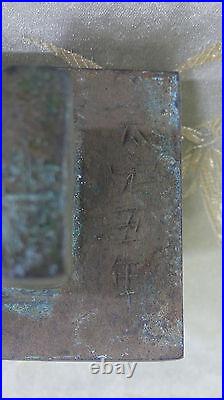 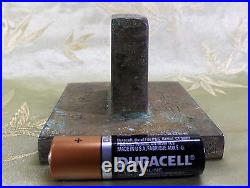 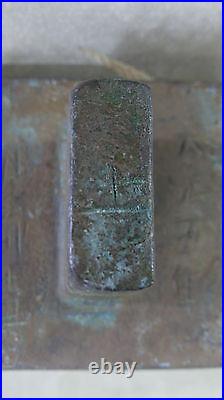 English Translation of Chinese Seal Script on this seal. Specifically, the characters on the top side of the stamp date it to the reign of Emperor Taiding Di (a great-grandson Genghis Khan and the grandson of Kublai Khan).

All official edicts coming from the Emperor would have been stamped in red ink with a seal like this one. This very large and heavy bronze seal weighs 1.27 lbs. It stands 2" (51 mm) tall and the almost square base measures 71 mm x 68 mm (2.8" x 2.7). Jìnzong and his Mongolian name Borjigin Yesün-Temür. He is thought by some historians to be an "unremarkable emperor" during the four years that he ruled China, from 1324 - 1328. He died suddenly in Shangdu on August 15, 1328, at the young age of just 34. This ancient, bronze seal or stamp (called a "Chop" in China) was cast in bronze during the early 14th century, in the reign of Emperor Taiding Di, the sixth Mongol emperor of the Yuan Dynasty. It is EXTREMELY RARE to find a dated, Imperial Seal from the Yuan Dynasty and this one is in museum quality condition. The emergence and use of seals, or "stamps" are generally believed to originate in China between the Spring and Autumn Period and the Warring States Period (475 BC -221 BC). This bronze seal would be dipped in red ink and then stamped onto silk scrolls that contained the specific details of the Emperor's Decree. This historic example is a bronze seal that was issued to a military officer or other high-ranking administrative official during the reign of Emperor Taiding Di of the Yuan Dynasty. The Yuan dynasty, officially the "Great Yuan", was the empire or ruling dynasty of China established by Kublai Khan, leader of the Mongolian Borjigin clan. The top of this large, bronze seal is stamped with the characters that translate to be authorized by the Great Yuan Emperor Himself, Taiding Di.

Chinese temple name: Taiding di; Chinese. November 28, 1293 - August 15, 1328 was a great-grandson of Kublai Khan and ruled as emperor of the Yuan dynasty from 1323 to 1328. Apart from Emperor of China, he is regarded as the 10th Khagan of the Mongol Empire or Mongols, although it was only nominal due to the division of the empire.

In Chinese, Yesün Temür Khan, who was very fond of the traditional ways of the Mongols, is known as the Emperor Taiding Chinese. From his era's name. His name means "Nine Iron Khan" in the Mongolian language. The Empire is a family of which the Emperor is the father. Taiding Di {Yesün Temür Khan}, c. The History of the Yuan. This bronze seal is believed to be that of a high, imperial government official, likely a mandarin during the Yuan Dynasty. On the top, vertical blade or handle of this seal is a single, compound character that is an ancient form of the Chinese word " Shang " (see photo # 6) which means "Superior" or Great. Taken with the other smaller characters such as this one that look like this. , I believe it could be translated as follows. "The Great Yuan Emperor Speaks".

On the top, horizontal side of the seal are seven characters that are in old Chinese, Small Seal Script (see photos # 2-4). It appears these characters were formed by a hammer and small chisel. I have attempted to translate them to the best of my ability; I alone take full responsibility for any errors in my translation. This ancient, bronze seal could be translated as follows. Please note, that there appear to be several additional characters next to the top, vertical blade or handle of this seal.

These characters are very tiny and the oxidation of the bronze has filled in the tiny engraving to such an extent that I cannot clearly see them, even under magnification. It is very likely that these characters list the name or title of the Emperor's mandarin or official that was issued this royal seal.

And of course, there are the cast characters on the bottom of the seal that would have been stamped onto silk scrolls with red ink. This very large and heavy bronze seal has. Authentic green oxidation on the bronze that was buried for millennia in damp soil that was rich in cuprite, azurite, and malachite. It is in "as found" condition and has been in a private collection for at least 50 years. Museums and modern archeological studies usually use the general term "copper alloy" instead of just the term "bronze" to describe these ancient treasures, as many other elements (such as tin, lead, zinc, iron, and even arsenic) were added to the copper to form different strengths of types of bronze items.

Ancient bronze artifacts such as this seals are probably about 80% copper and 20% tin, while modern bronze is closer to 88% copper and 12% tin. It has a wonderful old, patina that is absolutely fabulous: areas of a blue-green patina from the azurite and malachite in the surrounding soil.

This combination of colors forms a fantastic patina that is typical of bronze that has been buried for over 1,000 years. Close examination with a microscope under natural and black light reveal it to be 100% authentic and cast by hand in a sand mold. NOTE: For reference, a similar example of a Yuan Dynasty Bronze Marshal's Seal in a Chinese museum. Museum of Chinese History, Beijing.

The Ancestral Landscape, David N. The Great Bronze Age of China, edited by Wen Fong, MET, 1980. Smithsonian Museum, Sackler & Freer Gallery, WDC. Marshal's seal of the Yuan Dynasty. Philadelphia Museum of Art web page. Please examine the photos taken at 4x macro carefully as they are part of the description. Only= stays= when= ruler= "without="" darkness="" and="" corruption"=. This item is in the category "Antiques\Asian Antiques\China\Seals".