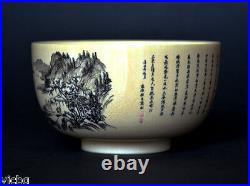 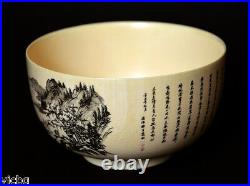 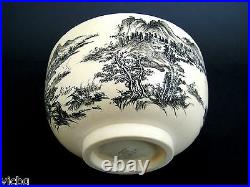 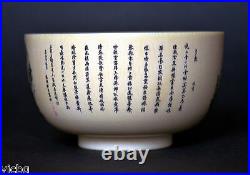 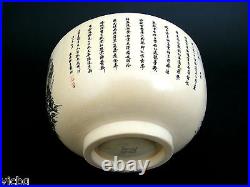 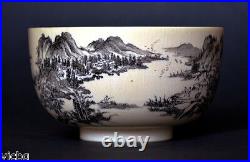 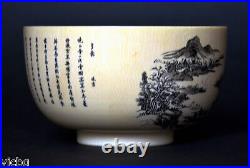 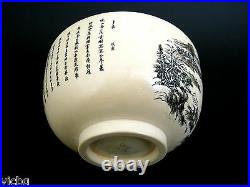 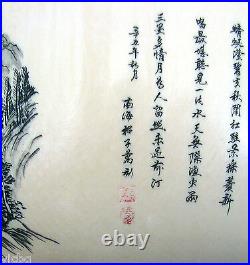 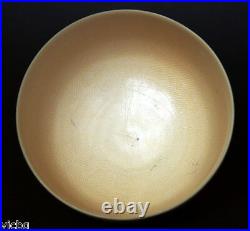 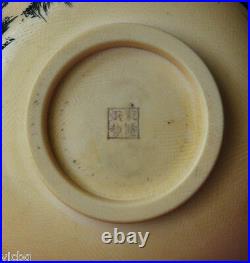 Important Chinese Imperial turned bowl crafted from one SINGLE piece. Century apocryphal Qianlong mark engraved at bottom of base, but we believe that most likely the bowl is a later Qing dynasty piece of around end of 19. The bowl has been exquisitely and finely carved using the extremely tough and time consuming turning process. Most certainly a vast number of blocks of material were selected and used in order to choose the BEST possible piece that was large enough and having an absolutely perfect, firm and even pattern condition such that, it made it possible a fantastic piece like the present one, to be crafted out of it. We strongly believe that one would never find another similar piece offered elsewhere besides probably seeing it in private collections or museums in China.

The present bowl is exceptional, measuring 107.5mm (about 4.25) in diameter at outer rim and is so finely crafted and carved that the rim is just 1.5mm thick at the very top of the bowl and appears to be almost semi-transparent. The bowl is 61.5mm (2.42) tall including the short straight channeled foot on which the bowl is supported. The outer side of the bowl is extremely well incised in black ink with a superb scene of mountains and a village among the hills, pine tree woods, a river with a sailboat and fisherman, as well as two scholars besides a small temple. Further there is a long poem / poetic inscription that is again incised and colored in black ink, ending with a two-character seal mark in red ink that we had not yet deciphered.

Unfortunately, we don't have a translation of the poem either, so there could be yet some further association or story behind the finely executed drawing. The bowl is in an ABSOLUTELY perfect condition without even a slightest hairline imperfection. It is completely firm and even.

One can't even believe how this could have been crafted from one single piece and reach a result of such perfection. Probably an extremely large number of raw pieces of material were selected in order to find this special perfect one that allowed the present bowl to be made.

The two other known similar Chinese Imperial turned bowls were from 18. The present piece that we are offering also bears the apocryphal Qianlong Imperial mark, but since we believe it is a later Qing dynasty piece from the late 19. Century or latest - a very early Republican, most obviously we cannot pretend this piece would probably reach such a high price. Nevertheless, after quite some time spent in a search for a second similar one. Elsewhere, it proved impossible to find another even for a reference.

Therefore, we consider it no less important than the ones we managed to find and compare it with. EXTREMELY SCARCE AND RARE QING DYNASTY ANTIQUE CHINESE IMPERIAL TURNED BOWL IN ABSOLUTELY PERFECT CONDITION! The delicacy of the decoration on this imperial bowl provides a perfect complement to the smooth carving and perfectly balanced proportions.

This type of decoration comprised of incised lines filled with black ink or lacquer to resemble ink painting has a long history in China. A rare Ming dynasty brush pot decorated with an incised design of the Three Friends of Winter is preserved in the Palace Museum, Beijing. In the Qing dynasty there were two versions of this style.

One of these had the fine lines of decoration against an uncolored ground, as on the current bowl. The other version had a dark, usually black or red lacquer, ground on which the designs appeared in reverse with fine line details. An example of this latter type of decoration can be seen on a table screen dated to AD 1771 in the collection of the Ashmolean Museum, Oxford. A similarly decorated (to the current) bowl is preserved in the collection of the Palace Museum, Beijing, and is illustrated in The Complete Collection of Treasures of the Palace Museum, Hong Kong, 2002. The esteem in which these bowls were held by the Qing court is reflected in the fact that one of the bowls in the Palace Museum has been given a gold lining, while the other has a silver lining. Such linings also suggest that these bowls may have been used on some special occasion, as opposed to merely being decorative. This item is in the category "Antiques\Asian Antiques\China\Bowls".

The seller is "vicbg" and is located in this country: AT. This item can be shipped worldwide.