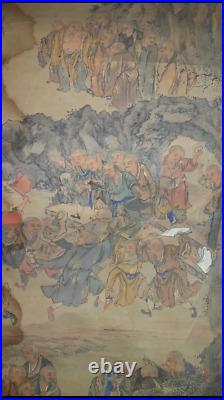 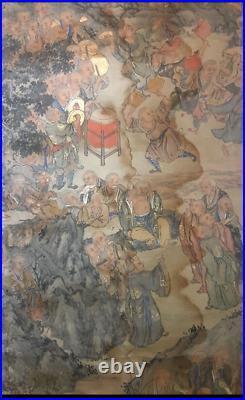 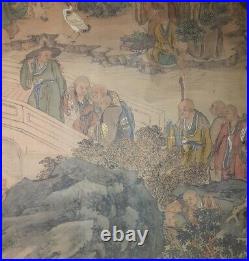 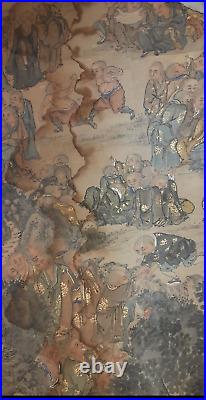 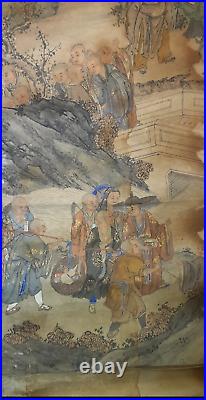 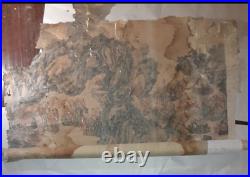 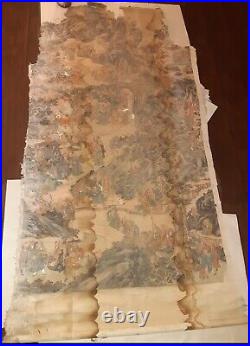 In the manner of Zhou Jichang and Lin Tinggui. This is a rare Hvashang painting of the Buddhist patron. It is a huge Buddhist painting representing the 500 rhats/luohans set within a verdant mountain landscape with monks depicting daily rituals leading up to eventually gain enlightenment once in the presence of Buddha. The Hvashang paintings origins are in both early Tibetan and Chinese Buddhism, and which achieved an extraordinary degree of syncretism between the cultures in the early 12th and 15th centuries and again in the seventeenth and eightenth centuries. Ming dynasties the paintings represented wisdom and enlightenment and the figures were placed within the tranquil confines of a natural landscape. The Qing dynasty witnessed a revitalization of the cutural contacts between Tibetan and Imperial China, and the Manchu ruling class officially patronized Tibetan-style Buddhist capital of Beijing. The highest form of Hvashang paintings are works that encompased all 500 Arhat on single scroll canvas.

These types of master piece paintings were hung in the Buddhist temples and used to celebrate during Buddha's birthday. Such art was also found in Buddhist temples, the Emperors' court, which was exclusively for the Emperor's immediate ranking family members, and his high ranking officials. The extensive amount and quality of gold used on this painting cleary suggest that the work was a major commisioned by a well to do parton of society.

This piece is very old and fragile which would be perfect for an institution, a religious institution, or an astute collector who can appreciate and properly preserve this delicate work of art. The rich and deep pigmented colors are beautifully adorned by the amazing light from the gold accent. Historically two of the master painters Zhou Jichang and Lin Tinggui were know to produce such commsions like this one.

To my understand multple pieces were given and passed over time. It is historically noted that the Qing dynasty emperors commisioned such pieces and passed them down to immediate family members. Online documentation indicate that some of these master pieces eventually made their way around the world, particularly to the United States where many members of Imperial families eventualy fled during difficult and unstable times.

Please carefully review the photos. The painting is in need of conservation as shown in the photos. This is a great opportunity for the pure at heart!!!

This item is in the category "Antiques\Asian Antiques\China\Paintings & Scrolls". The seller is "arle_gros" and is located in this country: US.