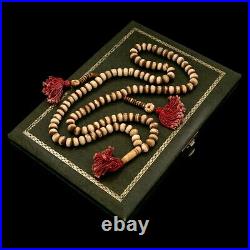 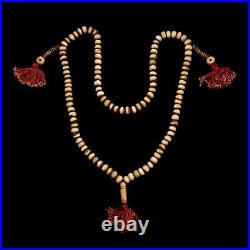 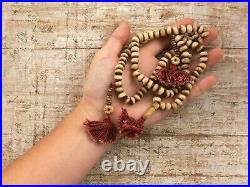 We have similar Chinese and Victorian items, which would pair nicely with this piece, for sale this week. Listing description by: Cait P. Markings: Unmarked, tested and guaranteed. Gram Weight: 59.9 grams. Main Stone: Faux resin bone.

Closure/Clasp Type: This necklace lacks a clasp and is meant to be worn over the head. Link Type: Faux resin beads on red silk string. Handmade during the Victorian era in China, which overlaps with the Qing dynasty. Chinese export jewelry was very fashionable amongst European and North American aristocrats during this time period with necklaces like this being highly sought after. The necklace consists of a red silk string upon which faux resin bone beads have been strung.

Additional beads adorn three dangling pendants which are finished with a tassel of red silk. When worn, the necklace sits against the decolletage on most people. This listing is for the item only. The Victorian era took place from the year 1836 to the year 1901, which was the span of Queen Victorias reign. Queen Victorias style was undoubtedly influential on the fashions of her country and ultimately led to three distinct jewelry trends emerging from the era. The first of these three styles was the Romantic period. The Romantic period was impacted by the Georgian period, which preceded it. The second period was the Grand period, which was primarily defined by mourning jewelry and the trends surrounding it.

The final period was the Aesthetic period. The Aesthetic period was more lighthearted and airy than the previous periods and focused on aesthetic beauty and joy. This era features floral, natural, and feminine motifs, and utilized chased gold designs, enamel, and seed pearls. The Qing Dynasty refers to the years between 1636 and 1912 during which the Aisin Gioro clan from Manchuria ruled over China. Jewelry styles during this expansive period varied but amongst the Qing court, certain qualities were consistently valued.

More than a means to show off wealth and status, the jewelry worn by members of the Qing quart was meant to be an expression of their morality and values. Lapis lazuli, coral, and turquoise were especially popular due to their associations with the worship of different deities. Plant materials, such as Bodhi seeds, the pits of fruits, and different varieties of wood were also used in Qing jewelry, their religious significance and fragrant aromas making them highly desirable. Outside of court jewelry used for ritual use, the jewelry worn daily became more ornate and extravagant, incorporating elements of Han Chinese fashion as well as techniques used in the West. As it always had been, gold remained the most popular metal used in jewelry, while filigree, inlaid and faceted stones, and glass rose in popularity. Chinese export jewelry became popular during the late Victorian period and persisted until the 1960s.

During this period, Chinese craftsmen were considered by far the best in the world. The rich and wealthy would custom-order a piece through their local jeweler, who would send the design off to China to be made and sent back to Europe. This lengthy process was very expensive, making Chinese export pieces highly desirable, then and now. The item "Antique Vintage Victorian Chinese Qing Dynasty Faux Resin Bone Imperial Necklace" is in sale since Sunday, April 19, 2020. This item is in the category "Jewelry & Watches\Vintage & Antique Jewelry\Fine\Victorian, Edwardian 1837-1910\Necklaces & Pendants".

The seller is "abeautifultimeco" and is located in Fort Collins, Colorado. This item can be shipped worldwide.