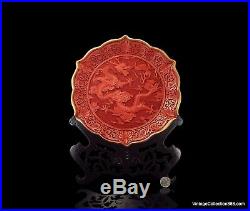 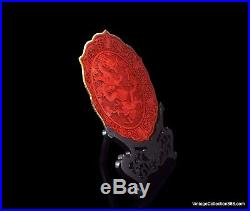 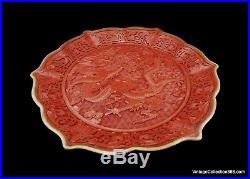 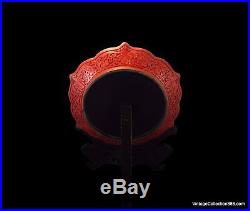 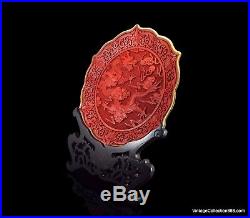 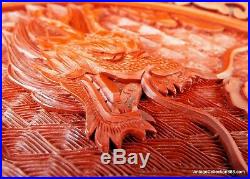 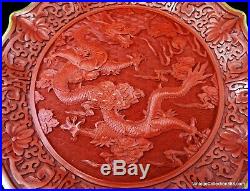 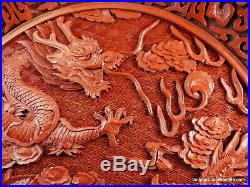 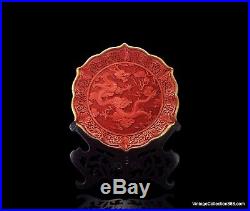 In the close-up pictures you can perfectly appreciate the cuts of the carving on the numerous layers of lacquer. Region of origin: Beijing, China. Previous origin owner: USA Collector, which in turn had acquired an antique dealer from Dallas (Texas) who indicated that it had been imported in the 70s directly from the only Beijing Lacquer Factory.

Antiquity: second half of the 20th century. Conservation: Good, the golden edges seem worn, but the lacquer is in very good condition. When the Qing Dynasty ended its period many lacquer factories disappeared, there were no lacquer carvers. At the beginning of 1900, a factory in Beijing was saved and with the Republic the government organized the heirs of that factory to restore the only factory of carved lacquer products in Beijing.

The carved lacquer requires a complicated manufacturing process, starting with a body made of brass or wood. After preparation and polishing, is coated with several dozen layers of lacquer to a total thickness of 5 to 18 mm. The recorders should wait for the lacquer does not crack dry. Then, the hardened lacquer is cut, and started creating "carved paintings" of landscapes, human figures, flowers and birds...

Then end up dry and polish. Usually, it takes 6-8 months to complete a piece of carved lacquer.

The ancient craft of carved lacquer originated in the Tang Dynasty (618-907). Lacquer skilled workers from around the country gathered at the factory to compete and cooperate with each other, unique features were developed in the ceramic carved lacquer. The industry reached its peak during the reign of Qianlong, since the emperor was an enthusiast, who had his coffin decorated with carved lacquer. However, the industry declined in the Qing Dynasty entering the final period. With solemn designs, calm colors and exquisitely engraved decorations, lacquer perfectly integrates the fine characteristics of lacquer and exquisite engraving ancient craft.

It is endowed with supreme artistic values and is an oriental art treasure and the first exclusively owned by China. The item "Antique Chinese Lacquer Cinnabar Plate, hand carved with Imperial Dragon 12" is in sale since Wednesday, May 8, 2019. This item is in the category "Collectibles\Cultures & Ethnicities\Asian\1900-Now\Chinese\Bowls & Plates". The seller is "amuletsshop" and is located in Santiago de Compostela. This item can be shipped worldwide.