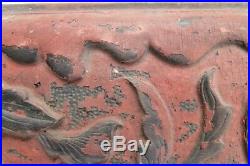 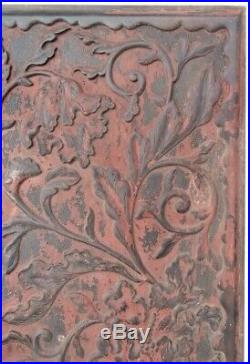 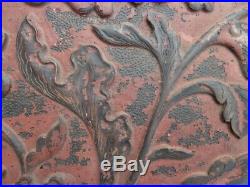 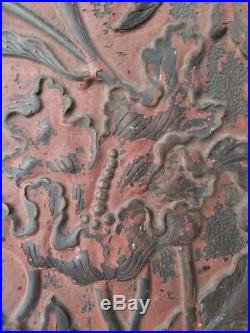 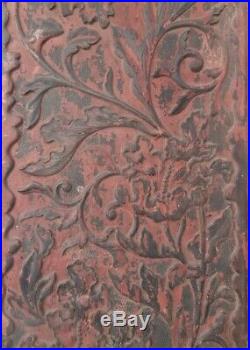 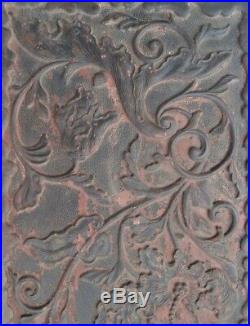 Item : Antique Chinese rectangular carved wood panel with a peonies or floral and scrolling acanthus leaves motif. It should be displayed as a relief wall plaque. Provenance: Neri Antiques, South Street, Philadelphia, Pennsylvania. 31 x 1/2 x 11 inches. Its heavy, solid wood and hand made / hand carved. My geologist friend identified the scattered red finish as cinnabar (mineral paint), however the item is in the woodcarving category as opposed to Chinese lacquerware. This panels motif seems to be influenced by European Rococo style. Aside from being in the Chinese Art category, Chinese people were traditionally Buddhist, so the panel might be considered Buddhist Art and it can appreciated for its Feng Shui appeal as well. The carving is masterful, so I wouldnt be surprised if it was made in the Imperial woodworking workshop. Background : The panels finish is Chinese red or vermilion which is made using cinnabar to pigment the paint. This is associated with many things imperial.

In Beijing, the Main Gate of the Forbidden City is painted with cinnabar color as are the columns in the throne room within the Palace of Heavenly Purity. In 2015, Bonhams in Hong Kong featured a pair of rectangular carved wood panels in one of their auctions and estimated them at 805,000-1,069,706 USD. Those panels also had a scrolling acanthus leaves motif, which the experts say was influenced by European Rococo style. They said that the panels were imperial but I dont know how they could prove that, so I assume thats just a stylistic term.

Also, they reputedly belonged to Marcel Proust. Neri had so many unique items that frankly I think people walking through his shop didnt understand what they were looking at.

And a lot of them have a special place in feng shui symbolism. In terms of feng shui, flowers: Add life and yang energy into a space, Improve design and decorations to spruce up the house or garden, Add colors that represent the presence elements that an area might be lacking, Can represent specific aspects of life that a resident might want to enhance, etc. It is no wonder that when live plants are not found at home, feng shui enthusiasts often have them painted on porcelain ware, embroidered on clothing and fabric, have them as focal objects on paintings and artwork, and even carved onto precious stones or engraved on wooden furniture. In fact, feng shui flowers are so generally auspicious that it is often said that when a homeowner cannot decide on what paintings to hang at home, going with flowers is a safe bet. History of Chinese Wood carving.

The Yuan dynasty (12711368) placed a very high value on the Hundred Crafts. Artisans of superb workmanship were accorded a respectful title Maestro Artisan. Woodcarving as a craft, however, still belonged under other professions such as architecture, furniture, and religious statues making. After mid-Ming, the carving arts became an independent craft category in its own right. However, many carving artists though famous for one single craft never confined themselves to that one single medium during their lifetime. For example, renowned bamboo carvers Zhu Ying and Pu Cheng both carved on wood as well. Rhinoceros horn expert Bao Tiancheng also did his art on i and red sandalwood. The talented carvers nevertheless devoted most of their time to i carving, with wood carving only as a side job.

It was the same outside the palace; no artisans could afford carving wood alone as an art or craft. It had to be part of furniture making or wood-framed structure building, or at the best carried out in rendering religious statues. Wood of fine grain is the prerequisite for successful fine carving. After polishing, it has to be fine to the touch, i. The most ideal material is boxwood .

In addition, Qienan incense wood (aloeswood,) and sandalwood are known for their nice aroma, whereas ebonys appeal is in its hues and sheen. Gnarled wood gets its name from its many knots, lumps, and snarls. Woodcarving artisans took advantage of this interesting natural form and subtly fashioned it into original artwork, with minimum and invisible knife work. The item "Antique Chinese Carved Wood Panel Imperial Cinnabar Scrolling Acanthus Leaves" is in sale since Friday, March 20, 2020.