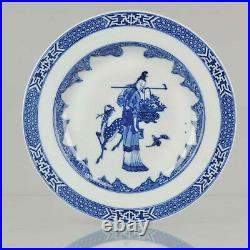 3500 "Make us an offer" Listings/. Antique 18C Chinese Porcelain Plate Qianlong Imperial Quality Xi Wangmu Deer. The paste is of the highest quality as are the painting and cobalt. Pictured is Xi Wangmu with a spotted deer next to her. The sacred mushroom is never too far away from the deer.

The border has nice 6 nice symbols. Xi Wangmu, the Queen Mother of the West , known by various local names, is a goddess in Chinese religion and mythology, also worshipped in neighbouring Asian countries, and attested from ancient times. The first historical information on her can be traced back to oracle bone inscriptions of the fifteenth century BC that record sacrifices to a "Western Mother". Even though these inscriptions illustrate that she predates organized Taoism, she is most often associated with Taoism. From her name alone some of her most important characteristics are revealed: she is royal, female, and is associated with the west. The growing popularity of the Queen Mother of the West, as well as the beliefs that she was the dispenser of prosperity, longevity, and eternal bliss took place during the second century BC when the northern and western parts of China were able to be better known because of the opening of the Silk Road. Super quality made to compete with the European Porcelain manufacturers. Pictures in natural light are added. The graceful and beautiful deer is not included in the Chinese zodiac but does feature in paintings.

It symbolizes longevity and riches as deer were believed to live to a great age. Lù means good fortune and government salary, and lù is also another word for precious jade. The god of longevity is often shown accompanied by deer; it was reputed to be able to locate the herbs of immortality. Retrieved from the Chinasage website. / Overall condition 3 chips (2 large) 1 line and some tiny frits/fleebites (nothing serious).

Depending on the situation it can take up to 1.5 month. This also influences the tracking data shown online. You can follow it at. The item "Antique 18C Chinese Porcelain Plate Qianlong Imperial Quality Xi Wangmu Deer" is in sale since Tuesday, December 1, 2020. This item is in the category "Antiques\Asian Antiques\China\Plates".

The seller is "theceramics_and_collectibles" and is located in Amsterdam. This item can be shipped worldwide.