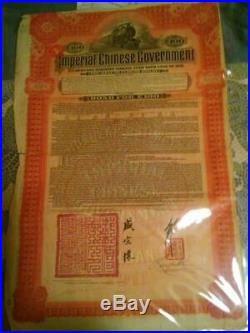 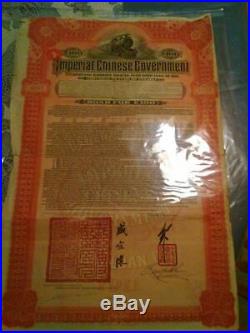 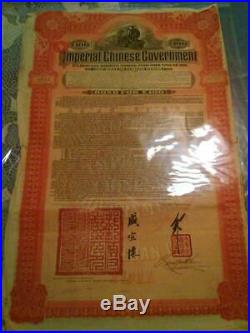 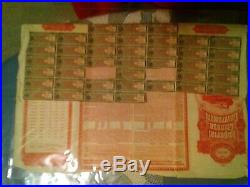 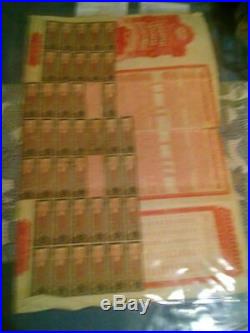 PLEASE SEE PICTURES AS THEY ARE PART OF THE DESCRIPTION; ANY QUESTIONS PLEASE ASK. The rich history behind this document impacted both China and the United States. The last imperial Chinese government in the Qing (Manchu) Dynasty issued the Hukuang Bond. The certificate is larger than most other bond documents, measuring 20x16 inches, and its terms are framed by a complex pattern to prevent counterfeiting.

The bond was designed by Waterlow & Sons, a major London printer of securities and financial documents, and it features a locomotive vignette. The Hukuang Railways consisted of two routes, the Canton-Hankou Railway and the Sichuan-Hankou Railway, which covered a total distance of approximately 2,545 miles. It was one of the country's most complicated railways and united central China with its coasts.

The Hukuang Bond was ordered by the Minister of Post and Communications, Sheng Hsuanhuai, on May 9, 1911, and was part of the nationalization of all locallycontrolled railway projects. On May 20, the Minister signed the loan agreement with the four-nation Banking Consortium and pledged the rights to operate the railroads. Initially in 1909, the credit was to be underwritten by a consortium of French, German and British banks, and by 1911 the United States had joined the consortium too. US participation in the bond issue was part of President William Howard Taft's policy of "dollar diplomacy, " which began at the start of the 20th century. On the Hukuang Bond, below the Chinese Minister's signature, are the underwriting American banks: J.

The First National Bank of the City of New York and the National City Bank of New York. This bond certificate marks the earliest business activities of these banks in China and predates the opening of their first regional offices there. Foreign participation in this issue caused an extremely vocal reaction by the Chinese in 1911, and a group called the Railway Rights Protection Movement was organized to protest the imperial government's negotiations with foreign banks. The most severe disturbance was in Chengdu, Sichuan. As a historian describes, the outraged Szechuanese groups protested that the government intended to sell Szechuan to the foreigners.

Ten years later, the British Minister of Peking, J. Jordan, declared the Hukuang Railway loan agreement was the proximate cause of the downfall of the Dynasty.