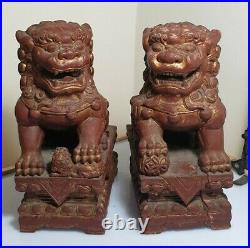 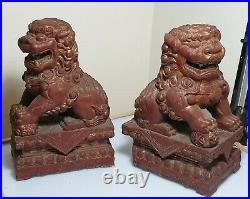 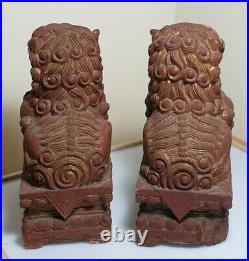 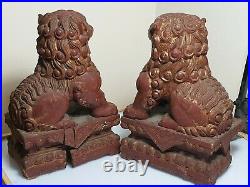 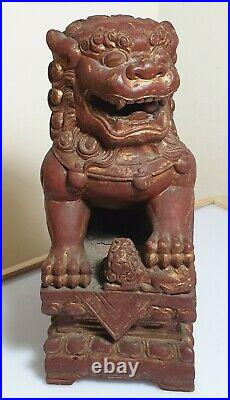 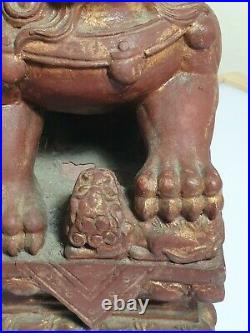 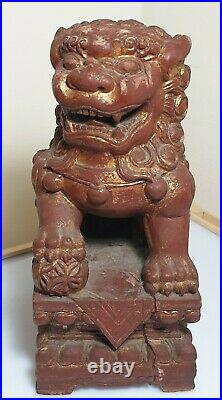 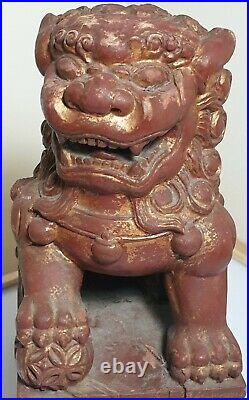 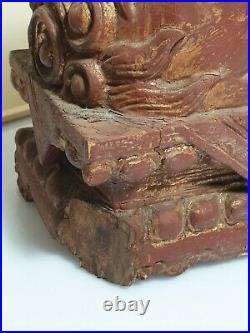 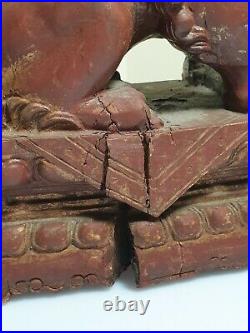 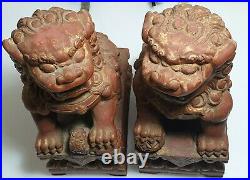 A Pair Of Finely carved 18th Century Qing Dynasty Gilt Wood Imperial Guardian Lions. Beautifully carved the lions are a manifestation of yin and yang, with the female representing yin and the male yang Both seated on a carved plinth the male lion is depicted with its right front paw on a cloth embroidered ball carved with a geometric pattern. (In imperial contexts, representing supremacy over the world) The female is identical, but has a cub under her left paw, representing the cycle of life. Symbolically, the female lion protects those dwelling inside (the living soul within) while the male guards the structure (the external material elements) both lions have a single large pearl in each of their partially opened mouths.

The pearl is carved so that it can roll about in the lion's mouth but sized just large enough so that it can never be removed. The lions were gilded but much of the gilt has worn away leaving touched of gold and the red gesso visible. Each measures approximately 25cm high x 17.5cm length x 11cm width. In lovely condition wear commensurate with age. Some stable splitting to the bases and one small corner missing (see photos) Please view the photos carefully as they are a vital part of the description. The item "A Pair Of Fine 18th Century Qing Dynasty Gilt wood Imperial Guardian Lions" is in sale since Monday, December 14, 2020. This item is in the category "Antiques\Asian/Oriental Antiques\Chinese\Figurines & Statues". The seller is "rachael26031" and is located in Matlock. This item can be shipped worldwide.