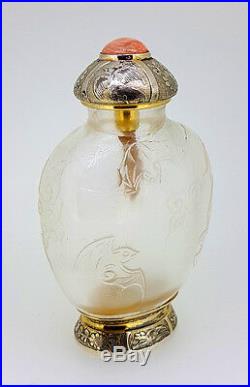 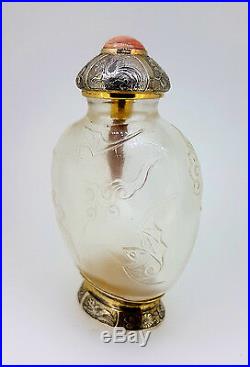 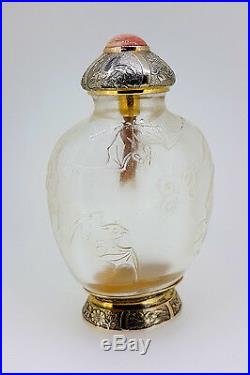 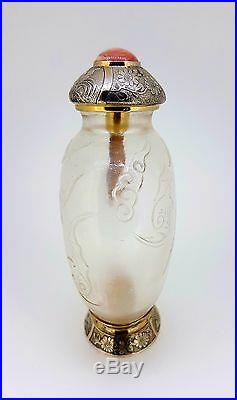 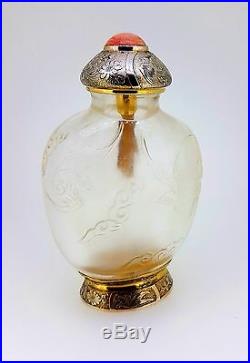 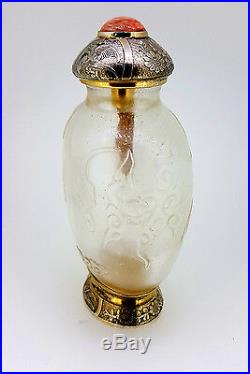 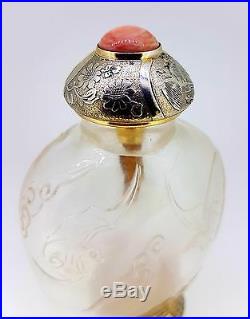 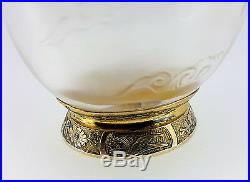 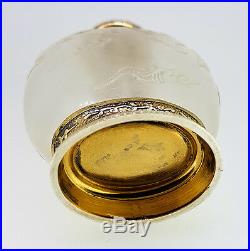 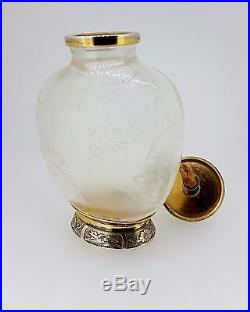 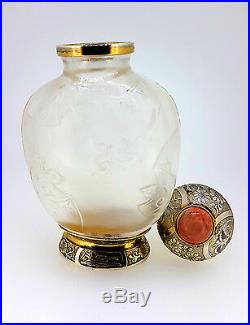 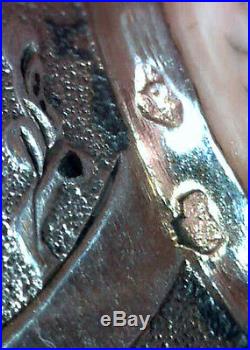 A Qing dynasty carved in relief rock crystal snuff bottle. The bottle is very well-hollowed of compressed oval form and crafted out of a flawless and transparent piece of rock crystal. The carvings are incised on each side and depict 5 flying bats flying among stylized cloud like patterns. The French silver base and stopper are fully hand engraved with blossoming flowers and birds of paradise. The stopper with a pink coral cabochon attached atop. There is also a silver gilt collar around the bottles neck. All silver parts are hallmarked with French silver hallmarks, as well as partial makers marks starting with a capital initial P. The bottle stands 8.3cm (3.27) tall with cap (7cm / 2.76 without cap) and is 5cm (about 2) wide and 3.3cm (1.3) deep. Gross weight is 96.6 grams. Provenance: Former collection of a known European aristocratic family. Absolutely scarce antique Chinese collector piece and one of the important and rare antique China carved rock crystal snuff bottles and works of art. Chinese admiration for bats began thousands of years before Christ.

Bats are believed to have highly developed sensory parts for "smelling" out places with auspicious chi energy. The next time these flying creatures come and nest in someones house, one should rejoice because that heralds good fortune. The bat is a symbol of happiness and joy. The Chinese for bat (fu) sounds identical to the word for good fortune (fu) making bats popular in Chinese culture.

Groups of five bats is said to be more powerful formula for abundance and fulfillment of dreams. Five bats together have long been used by Chinese artists to represent the five blessings: (wufu): long life, wealth, health, love of virtue and a peaceful death.

Qing Chinese Carved Rock Crystal Snuff Bottle 5 Bats Imperial Palace RRR" is in sale since Thursday, November 28, 2019. This item is in the category "Antiques\Asian Antiques\China\Snuff Bottles". The seller is "vicbg" and is located in Wien.